Join Cynthia in her garden at the 3rd Annual

I dream . . . of the natural and built environments and how they might interact. The results may lean toward Mother Nature and/or compliment her. Many ideas frolic without particular meaning but some are serious.

I see . . . the object. Sometimes I see the space around it. Usually, it is a combination of the two.

I neglect . . . naming an abstract piece, causing viewers to make of it what they will. The piece must take on a life of it’s own. When this happens, people see things I would never have imagined.

I believe . . . steel is a marvelous medium. Strong and pliable, it speaks to me. If I work it, respect it, and treat it gently, ironically it will reward me by telling my story to others. If people walk around, touch, and occasionally climb my sculpture, I consider it a success. It means they have connected with it. It is talking to them.

I am . . . a dedicated artist who believes all of these things influence my art.

Cynthia McKean grew up in Montana and Wyoming. The horizon there is chiseled against a sky so blue that some say it hurts their eyes. Wide open spaces go on forever. Mountains thrust upward to the sky. Colors are strong. Weather is fierce, be it hot or cold. Wildlife has adapted as has the vegetation sustaining it. People are so few that it is natural for them to become molded by these extraordinary surroundings.

It is not surprising that she chose to attend a small liberal arts school in WallaWalla, Washington called Whitman College. She graduated in 1963 with a degree in biology. For the next three years, Cynthia worked as a research assistant at the University of Oregon Dental School.

She left the work force to be a full time mother when the first of her two children was born. As she pondered during ensuing years, she began to understand that in order to champion the wonders of the Natural environment, one must also comprehend the built environment.

The University of Idaho was buried in ash in 1980 when Mount Saint Helen blew her top. On the same day, three hundred miles away, Cynthia McKean graduated with a degree in architecture. Before long, she was working for the Idaho Department of Energy giving seminars on alternative energy.

As fate would have it, in 1982 Cynthia joined the manufacturing industry in Michigan. The factory into which she poured her life had this wonderful, special place called “the weld shop”. By the mid 1990’s, she finally followed her heart to the local vocational technical center and started welding her own ideas into sculpture. In June of 1997, she began her new adventure as a sculptor.

Today she lives in Saugatuck, Michigan. Her studio, fondly referred to as “The Barn”, is down the driveway in the woods behind the house. She continues to find it all enthralling.

Many wonder where it all begins…
Behind her home in Saugatuck, Michigan, Cynthia McKean works in her studio lovingly referred to as “The Barn”. Several pieces of sculpture reside in the meadow and woods surrounding the barn.

On sunny, warm days the oversized barn doors burst open letting in the breezes and feelings of Mother Nature. While on colder days, the wood stove keeps everything nice and toasty.

At the rear of the barn is the loft where the creative process takes place as is evident by models, drawings, macquettes and various other artistic supplies that litter the surroundings of the heart of the studio. 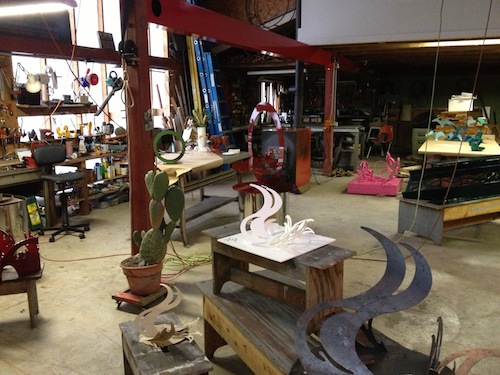 At first glance one sees projects in various stages of completion. 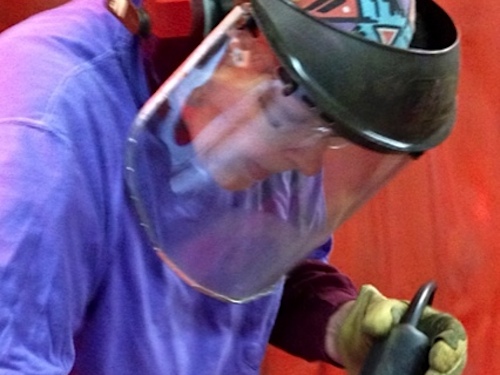 Cranes, lifts and welding equipment are apparent indicators of an actively working studio..

So simply put, the art of Cynthia McKean begins at her studio and finds its way to a new home to become part of another place. 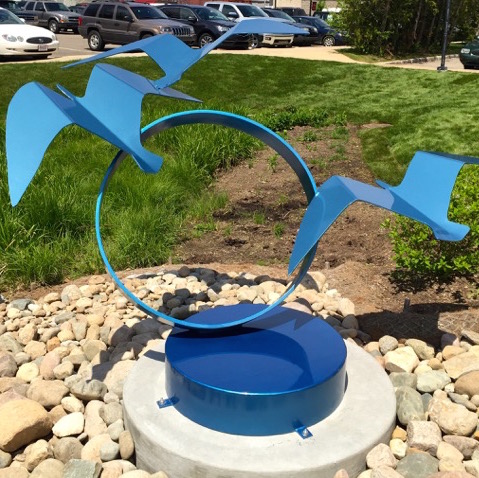 Three gulls fly through a ring in the garden at City Hall, South Haven, Michigan 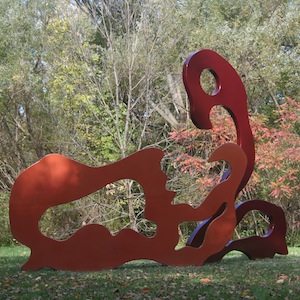 Meet two friends resting in the meadow of Cynthia's Studio on Mason Street, in Saugatuck, Michigan. 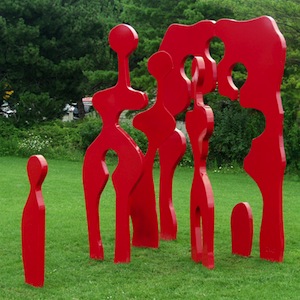 A representation of the cyclical nature of life, Family of Man can be experienced at picturesque Coughlin Park on the edge of Kalamzoo Lake in Downtown Saugatuck, Michigan

Cynthia has created countless works of art from tabletop designs to projects weighing several tons. All of them are special to her in as many ways as there are projects. The pictures below have been selected for your viewing pleasure and represent a small sampling of her many beautiful pieces.

Please note, that these are not any of her "Petite" pieces. Clicking the SMALL SCALE link at the top of the portfolio will take you to an entirely different section displaying some of her small scale works. Enjoy!

Working side by side with Cynthia McKean, a recognized sculptor, to create an individual and unique piece of art is a dream come true for many clients. The process is a very personal approach to the development and fabrication of an individual sculpture that is created with a cooperative eye between the artist and client. The original and creative results will bring years of personal satisfaction and joy. Commissions usually begin when potential customers contact Cynthia with an idea or ideas about a piece they would like. Typically they already are familiar with Cynthia’s work. It begins with a discussion about how they might work together. If they are close to Saugatuck, they often tour local installations.

If the customer is interested in something similar to what Cynthia has already produced, the process tends to be rather straight forward.

If the client is looking for something entirely different then it becomes more involved. Often after one or several meetings Cynthia needs to spend time just thinking about the project. She calls this “steeping time”. Sometimes it takes a few weeks, sometimes a few months, and occasionally more than a year. She keeps in touch with the client during this process.

When an idea starts to take form, she typically does a series of drawings and/or builds a simple model to present to the customer. They review it together. If they are pleased, the sculpture may go into production, or it may continue to be refined in the same give and take fashion, perhaps with additional drawings and one or more additional models.

When the concept is ready for fabrication, it is time to create a formal order. Typically a 50% deposit of the total cost of the project officially enters the order. The balance is due upon delivery.

Total cost may include:
Price of the sculpture
Sales tax when applicable
Delivery
Installation

This is a modal.

Reveal makes these very easy to summon and dismiss. The close button is simple an anchor with a unicode character icon and a class of close-reveal-modal. Clicking anywhere outside the modal will also dismiss it.